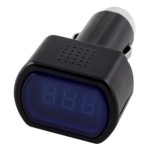 Voltmeter in the car like the extended battery life that showed me that the battery in your car is already weak and thus the battery has been charged in a timely manner .   It follows two advantages always started the car , was left hanging somewhere in the parking lot or just when I have to rush to work in the morning . A second advantage is that the cheaper the car battery to be charged on time have a longer life . Tension in the diagnosis of the car battery is properly assessing what my voltmeter shows. Where do I buy this voltmeter ? I am ordered in aliexpress shop or ebay

Here is my best car voltmeters to cigarette plug 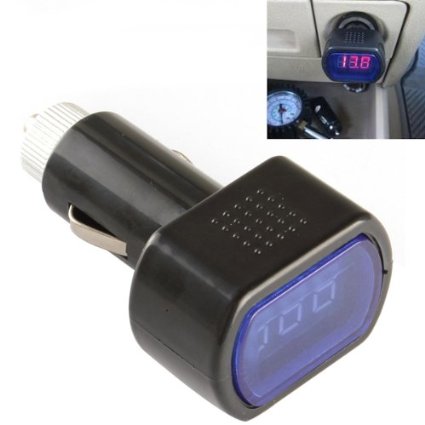 Condition of the car battery in volts 14.4 – 13.8V car is running the alternator charges the battery when the battery is recharged so it should show about these values 13.1 – 12.8V Battery as the new but alternator not charge battery -car not runing 12.8 – 12.5V battery is already older but still a good start in the winter months si good preventive  charge  . 12.5- 12.0V battery can have the power to start the car but it is undercharge or older , must be recharged . Although 12.0 – 11V battery is marked 12V 12.0V but the threshold below which it would not go if you take into account the long battery life . 11V battery is low after charging if the battery itself is under 12 battery is bad , you may have a defective article. 10.5V 10.5V less the limit stated by many manufacturers as the maximum discharge limit , below this limit may damage the battery . Few facts that you should know car battery

Never have car battery car battery discharged on frozen electrolyte in it freezes when the temperature drops below zero , ice damage lead cells – their deformed .Full charged car battery will last more than -20 *not frozen.For diagnostic batteries use a voltmeter and never going the battery status under 12V . Not overcharge car battery ,advanced battery charger allows you to set the type of battery ( flooded, AGM , Gell about them next time in another article ) Classic lead battery is considered charged if it reaches the 14V voltage should not be 15V . Optimal charging voltage is 13.8 – 14.6V . According voltmeter do I know whether the battery is charged and I unplug it from the charger . Never charge the battery , high current , the battery may not creat air bouble to prevent damage to cells and if the damage so quickly begin to Sulfatation . voltmeter play Insert voltmeter into the cigarette lighter . Installing is very easy voltmeter just insert only into the cigarette lighter – 12 – 24V voltmeter connection and immediately measured . Connection 12V ( or 24V for more truck cars ) is built into every car . Before installing a voltmeter in the car it can be cleaned only improve measurement accuracy . Diagnosis alternator and battery .

To start diagnostic you to diagnose whether you play alternator recharges the car battery . The process is simple inserting into the cigarette lighter voltmeter should indicate battery voltage 12.8V to 13V , for example, you start and tension should rush to 14V ( + -0.5 ) alternator is Ok . If you remain about the same around 12V alternator is not charging the battery ! Repair or replacement alternator is probably avoided, but save you money for that battery should not be recharged , and you would probably be destroyed or significantly shorten the life of the well for a tow truck . The battery is above 12 volts but the car does not start with it ! Sulfa older battery cells and the capacity of these cells is greatly reduced while the voltmeter may indicate a value of eg 12.6V battery but with such articles is unable to supply sufficient current to start the car , such a battery is said to be soft .

Voltmeter to truck  car power of battery you can test with a voltmeter . The car is not runing , in 12V socket ( cig. lighter ) to slip voltmeter that shows battery status , for example 12.6V . Turn on the low beam voltage at battery  should fall but if the battery is so strong dropdown is no more than 1 . However, if the battery is ” soft ” will be even greater dropdown in 2 – 3V . ( Low beam only example where they are led lights so ordering too much and do not have a soft handle to tighten the faucet without a large voltage drop , it is right that the burden of such 30 – 50Watt ) Frequently asked questions and answers . Voltmeter will also work in the truck or in a vehicle where the 24V ? Yes voltmeter will work with vehicles which is 24V . Voltmeter range is 8 – 30V If the voltmeter leave in the car when the car is on the disused car battery has discharged ? No voltmeter has very little power consumption Alert me play me 20 times more power than voltmeter . It’s not wrong if the voltmeter remains connected even when the car not use.For very long time if not riding a voltmeter pull out the lighter . What is the intensity and visibility of the display ? Visibility values ​​is very good . Voltmeter is red ( time should be available also the version with blue digital) . How accurate voltmeter can be relied on him ? Each voltmeter is tested before shipment , controls the display and accuracy . Accuracy is be usually around +-0.1 V which means good accuracy for diagnosing the state of car batteries do not need any more . i created one litle funny video story with car voltmeter: